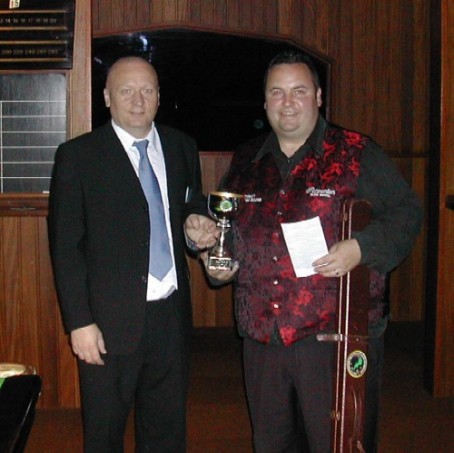 Player of the month for November 2015 is Steve Downing. Since coming to the West Country in 2002 Steve has made a significant impact on the Cornwall Billiards & Snooker scene, a snooker related insight can be found on the St Blazey & District Snooker League website. Steve’s not been a regular feature at WEBSF tournaments. However, when he does turn up he often makes an impact, as was seen recently at the West of England Open Snooker Championship. Steve reeled off breaks of 115 clearance, 94 & 107 in consecutive frames and went on to reach the final, after what he considered a mediocre day’s snooker!

Steve is also an excellent exponent of the three ball game and a fine Billiards & Snooker Coach. When he’s on his game, he really can beat any player…..

Why ‘The Destroyer’? Ask his opponent who was on the receiving end of those three consecutive breaks, I’ve heard he’s still having counselling…….;)