14th January 2006
Adam Gallen was victorious as Exeter young guns started their quest to reach the grand finals of the West of England Billiards & Snooker Foundation, Bronze Waistcoat for under 15’s. The GWRSA Social Club, Exeter are to host all four Exeter events leading to the grand finals which will be held in Plymouth in May.

In the round robin stages good performances where given by one and all. Gallen starred cutting through the field without losing a frame. He was followed closely by a trio that could only be separated by points scored. Will Blackmore pipped Michael Rogers, third and Matt Sercombe, Fourth for second place to make up the semi-final quartet. There were no breaks of note however, the standard of single ball potting captured onlookers attention throughout the day.

In the first semi-final Gallen out-potted Sercombe to win by 2 frames to nil. In the other semi-final Rogers from Taunton did likewise in defeating Blackmore. The final capped an impressive days snooker from Gallen who completed the white wash wining 2-0. All players received ranking points the finalists..trophies and prize money.

Mel Berry, Tournament Director and club representative said “It was a pleasure to organise a tournament where all players complied with the dress and behaved impeccably, both in victory and defeat.”

11th February 2006
Dan Hine took no prisoners in winning his first and the second in the series of Exeter West of England Billiards & Snooker Bronze Waistcoat Tournaments at the GWRSA Social Club, Exeter. Hine won all his matches without dropping a frame posting breaks of 24 & 22. In the first group match Matt Baker played very well to take Hine to a close finish, just losing out on the colours. Last months winner Adam Gallen was a close second in the group, wining all but one of his matches. Will Blackmore finish third by way of losing to team mate and practice partner Gallen in a closely fought contest. Matt Sercombe was the final qualifier that made up the semi-finals.

In the semi-finals Hine cruised past Sercombe wining 2-0. However the other semi-final prove a much closer affair. Blackmore seemed to have the upper hand against Gallen going 1-0 in front only for Gallen to pull one back to level the match at 1-1. In a very tense final frame Gallen cashed in on a missed pink over the pocket by Blackmore to win a super contest.

The final saw Hine finish the day strongly, beating Gallen 2-0 to set up an interesting next tournament in March. Gallen remains out in front in the rankings with Blackmore and Sercombe closely contending the second spot. Hine is in fourth position and Michael Rogers Fifth both having only played in one tournament.

11th March 2006
Dan Hine scored freely making several small breaks on his way to a second successive West of England Billiards & Snooker Foundation Bronze Waistcoat win without dropping a frame. Round three of this under 15’s snooker tournament was once again hosted by GWRSA Social Club, Exeter. Hine gave Adam Gallen, current ranking table leader, little chance in the final compiling a 41 break to win the first frame and a 20 in the second to win 2-0.

On his way to the final Hine beat Michael Rogers (Taunton) 2-0 Rogers at just 11 years will be one to watch in the future. In the other semi final Gallen was pushed all the way before beating Matt Baker 2-1. Baker potted well showing great improvement over previous outings.

In the group stages Hine excelled, posting a 31 break and three others in the 20’s to finish in top spot. Matt Baker played well in all his games to qualify second. Matt Sercombe, a technically sound player struggled to find form, just failing to qualify.

Group 2 was a much closer affair with Gallen heading it up by virtue a narrow victory over Will Blackmore in the final group match. Rogers did well to qualify from this evenly contested group. Winner, Runner-up and losing semi finalists won prizes and trophies.

At the halfway stage Gallen, Sercombe, Baker & Blackmore were awarded certificates having recently completed a full course of Match Play Snooker lessons under the watchful eye of WEBSF Head of Coaching Steve Canniford.

Tournament Director Mel Berry said “It’s good to see the youngsters enjoy their snooker. We are seeing the standard improve with each tournament, this is testimony to the coaching, practice and match play they are receiving on a regular basis” 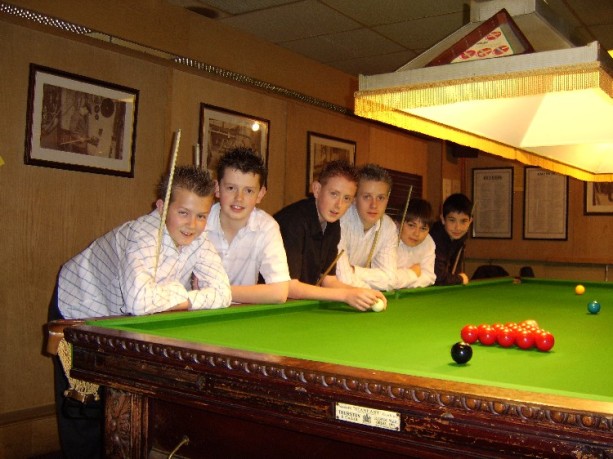 8th April 2006
Dan Hine won his third successive West of England Billiards & Snooker Foundation Bronze Waistcoat event with ease at the GWRSA Social Club, Exeter beating Adam Gallen 2-0 in the final. However, Gallen took the overall Exeter champion title by virtue of finishing top of the ranking table with Hine in second place, Matt Sercombe third and Michael Rogers in forth. The top four players will now travel to Plymouth later this month to compete in the Regional finals to determine the overall WEBSF Bronze Champion.

The semi finals saw Gallen ride his luck to narrowly beat Michael Rogers (Taunton) 2-1 who was left ruing missed chances. In the other semi final Hine beat Sercombe 2-0 with ease.

Hine topped his group for the third successive tournament beating everyone without losing a frame. Matt Baker continues to improve through match play and almost caused an upset when he swapped frames with Rogers. However, Hine proved far to strong a contender piling on the points against Baker that made the difference sending Rogers into second place.

Gallen won group B without dropping a frame. However, it was Matt Sercombe that pulled out all the stops to finish second by virtue of beating Will Blackmore 2-0 and might have won the group if he had won the two close losses against Gallen.

Steve Canniford, WEBSF Head of Coaching thanked the GWRSA Social Club representative and Tournament Director Mel Berry for the commitment and sponsorship he and the club has shown, helping the WEBSF provide Billiards & Snooker at grass roots level.