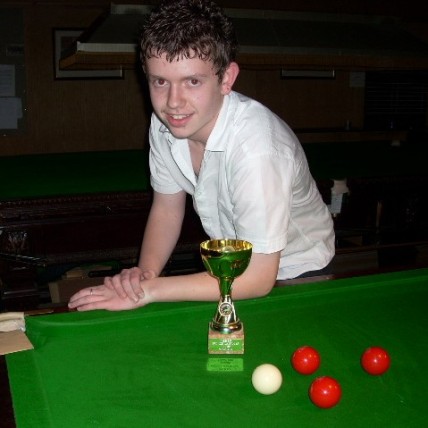 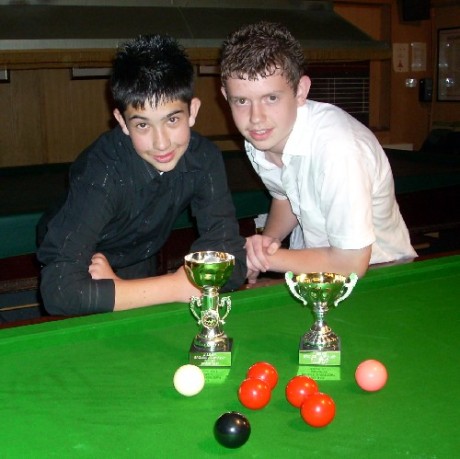 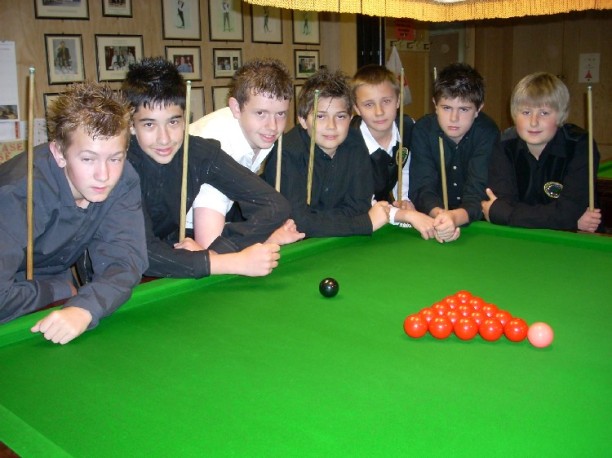 20th October 2007
The first in this years series of West of England Billiards & Snooker Foundation Bronze Waistcoat events (Exeter) got underway with a well earned win for Will Blackmore against Adam Gallen. Blackmore, often on the receiving end against one-time fellow team mate Gallen turned the tables with a convincing 2-0 win in the final. Blackmore beat one of the strong favourites Michael Rogers from Taunton 2-1 in the semi final with some excellent potting. In the other semi final Matt Baker was having a good tournament until he met a rejuvenated Gallen who had been struggling earlier in the group stages and only qualified on frame count-back. Gallen ran out an easy winner 2-0.

Rogers dominated group A winning without dropping a frame making a string of useful timely breaks. Baker narrowly qualified as runner-up aided with some inspired potting. Newcomers Ben Mills & Adam Chadwick played extremely well given this was their first ever tournament, Both losing frames by just a single point. Group B was a tough group which ended with all players equal on matches won, frame difference and head-to-head results. Jay Bullen was the unlucky loser based on aggregate score. Eventual finalist Gallen and Blackmore qualified, Gallen posting a superb 41 break the best of the day

The tournament was sponsored by GWRSA (South). Tournament Director Mel Berry said “The tournament went without a hitch and all players were dressed to look the part. I can see improvement from last season which is supported by the number of breaks and the standard of play we have seen here today. All augers well for future events”. Anyone interested in playing in this tournament should visit the WEBSF web site http://www.websfsnooker.com

17th November 2007
In-form Will Blackmore won the second event of the West of England Billiards & Snooker Foundation Bronze Waistcoat (Exeter Region). It was a repeats all round firstly with Blackmore defeating Adam Gallen in a closely fought final for the second time in a row. The semi finals were also a repeat of event 1 with Blackmore beating Michael Rogers from Somerset 2-1 to reach the final and Gallen beating Matt Baker 2-0. Up until the semi final Baker had been in superb form potting everything put before him to come top of his group in front of Gallen and a very much improved Adam Chadwick who just missed out on qualifying.

In the other group Rogers scythed through the field without losing a frame. Ben Mills putting up the most resistance. Jay Bullen was unlucky not to push Blackmore out of contention, Blackmore needed to win by at least 71 points in his last match against Mills to qualify ahead of Bullen. Blackmore potted exceptionally well winning by 107point to 9. You could not have guessed that this was Mills’ biggest defeat to date as he took the result with a great sense of dignity for one so young.

In an effort to combat Blackmore’s potting prowess some of his peers have sought matchplay safety coaching in preparation for next months tournament. The tournament was sponsored by GWRSA (South). Tournament Director Mel Berry said “Newcomers Chadwick and Mills impressed me today with their keenness and attitude. With this approach I’m confident they will improve as the tournaments progress. “. Anyone interested in playing in this tournament should visit the WEBSF web site http://www.websfsnooker.com

22nd December 2007
Michael Rogers from Taunton has been many times a finalist but never a winner of the WEBSF Exeter Bronze until now that is. Against Rogers in the final was two times winner Will Blackmore had been in great potting form, making a string of small breaks throughout the day. Rogers game plan was obvious from the start, keep Blackmore tight with good safety play and score off his mistakes. The plan proved a good move as Rogers gradually took Blackmore out of his stride and amassed frame winning points to win 2-0. In the semi final Rogers had the best break of the day a 34 against the improving Matt Baker to win 2-0. In the other semi final former winner Adam Gallen seem out of sorts as Blackmore potted his way to a comfortable 2-0 win.

The group stages culminated with several players in position to qualify for the knock-out stages. In group A Gallen finished top with the second place undecided. Ben Mills had the difficult task to beat Rogers by 88 points to qualify in second, less points and Jay Bullen would qualify. If Mills lost then Rogers would qualify. After a gallant attempt by Mills, Rogers qualified by potting the black to win by just one point. Mills did well in some of the other group matches taking frames off seasoned players Gallen and Bullen to record his first wins.

Blackmore won the second group with ease, potting at will after some sloppy safety play from his opponents. Second place was not decided until the very last frame, Baker had started the tournament in fine form and look certain of taking one of the qualifying spots. However, Adam Chadwick after a poor start came strong as the groups came to a conclusion. A win over Baker meant that he had to beat Blackmore to have any chance on points count back. Blackmore proved too strong and won comfortably allowing Baker to qualify in second place.

The tournament was sponsored by GWRSA (South). Tournament Director Mel Berry said “It’s good to see Rogers win at last, he has great potential, let’s hope this spurs him, the newcomers on to improvement”. Anyone under 16 interested in playing in this tournament should visit the WEBSF web site http://www.websfsnooker.com

GALLEN STARTS HIS BID FOR BRONZE

26th January 2008
Adam Gallen from Exeter, runner-up in two West of England Billiards & Snooker Foundation finals this season, went one stage further to take victory against last months winner Michael Rogers from Taunton. Gallen reached the final stages of the competition by first qualifying in second place from group B behind Will Blackmore. In the semi final Gallen swept aside Jay Bullen 2-0 to book his place in the final. Rogers path to the final started as a convincing winner of group A, losing just the one match to Bullen who scored breaks of 40 and 21 in the same frame. Bullen joined Rogers as second place qualifier to reach the knock-out stages. Other results saw new comers Ben Mills and Adam Chadwick compete well against more seasoned campaigners and Matt Baker just fail to pip Blackmore to qualify.

The tournament was sponsored by GWRSA (South). Tournament Director Mel Berry said “Gallen’s victory means that the ranking table is looking a bit congested at the top, we should have an interesting run in to the finals day.” Anyone under 16 interested in playing in this tournament should visit the WEBSF web site http://www.websfsnooker.com 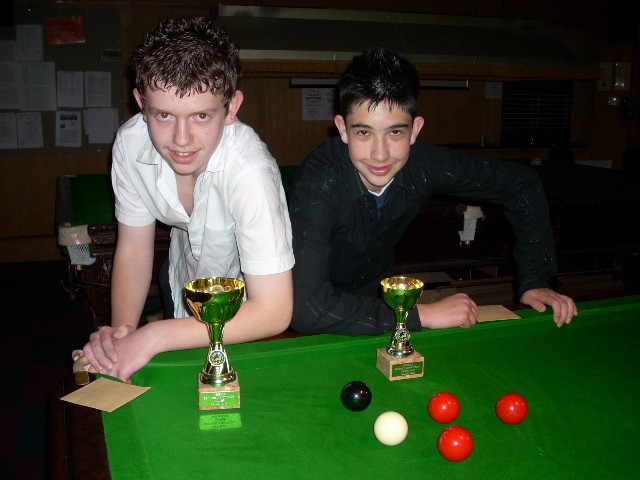 23rd February 2008
Adam Gallen beat Will Blackmore 2-0 in event 5 of the WEBSF Exeter Bronze Waistcoat final. Gallen took the first frame after Blackmore went in-off the black following several good chances for both players. After a long bout of safety play in the second frame, where both players continually rolled the cue ball into the pack of reds the referee call for a re-rack. The restarted frame proceeded in a cautious fashion with neither players wanting to take the initiative. With reds opening up into good potting positions both players struggled to make anything other than small contributions to the score board. It was Blackmore that potted a superb pink and black to force a re-spot black only for Gallen to pot a great black for frame and match.

Adam Chadwick broke his duck by qualifying for the knock-out stages for the first time in style. He won Group A in style. Chadwick beat all players bar Rogers who qualified close behind him in second place. Ben Mills also did extremely well to finish in third place, just one victory away from qualifying. Matt Baker was off form finishing in fourth place. Blackmore won group B with ease making breaks of 28 & 25cl. Gallen finished second and Jay Bullen third.

The tournament was sponsored by GWRSA (South). Tournament Director Mel Berry said “Gradually the gap between the best and the rest is closing. Adam Chadwick and Ben Mills continue to show signs of improvement and are proving no longer to be an easy draw.” Anyone under 16 interested in playing in this tournament should visit the WEBSF web site http://www.websf.co.uk 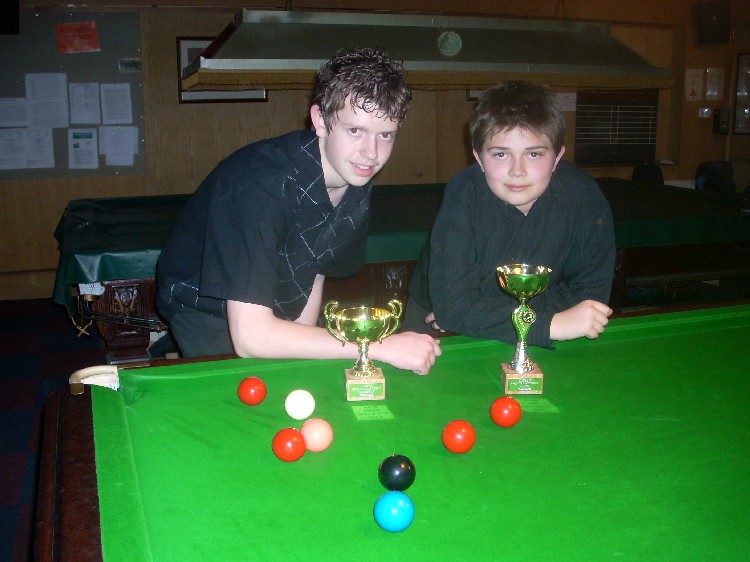 22nd March 2008
Michael Rogers came from one frame down to beat Adam Gallen 2-1 in the final event of the Exeter Bronze Waistcoat tournament. However, this was not enough to prevent Gallen from overtaking Will Blackmore in the ranking table to secure the overall title of Exeter Bronze Waistcoat Champion. Blackmore had led the rankings all season until the group stages of this final event. By failing to qualify for the knock out phase cost him dear as all Gallen had to do was win through to the final to snatch the championship. This he did by beating newcomer Josh Grimes 2-0 in style but not before a tentative first frame where Grimes looked to be staging an upset. However, it was not to be as Gallen finally got his act together finishing strongly. In the other semi final Rogers beat Adam Chadwick 2-0. Chadwick who had played some of the best snooker of the day to qualify for the knock-out stages finally ran out of steam against Rogers.

In the group stages Ben Mills came within a few points from qualifying for the second tournament in a row, this time losing out to Grimes who had to beat group winner Chadwick and score 46 points. He scored the required points and won the match by just 2 points. Ever Philosophical and positive in defeat Mills sets his peers a fine example and will no doubt be raring to go next season. Grimes played well in all his matches and probably would have challenged for regional finals day qualification had he entered the previous tournaments. Jay Bullen had an indifferent day as a player, finishing in fourth place but was still keen enough to want to referee the final so as to gain experience as part of a desire to become a graded referee. In the other group Gallen won all but one of his matches to win the group. Rogers was placed second making the best break of the day a 31. For the first time in eight consequtive tournaments Blackmore failed to reach the knockout stages. The four that qualify for the Regional Finals Day on the 24th May 2008 are Gallen, Blackmore, Rogers and Matt Baker.

The tournament was sponsored by GWRSA (South). Tournament Director Mel Berry said “An exciting end to this years tournament let’s hope we can go one better and have an Exeter lad win the regional finals this year.” Anyone under 16 interested in playing in this tournament should visit the WEBSF web site http://www.websfsnooker.com