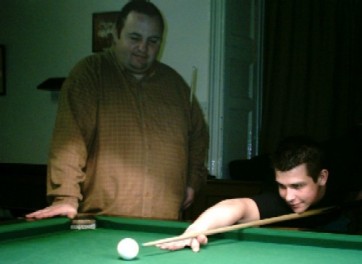 Congratulations to Steve Brookshaw (Plymouth), Steve Downing, Vic Wills & Paul Broad (Redruth) for successfully achieving WEBSF Bronze Coaching status. All four have been involved in coaching leading up to their assessments, giving their time to pass on valuable knowledge and experience.

Steve Brookshaw, one of the top Billiard players in the West Country, is also an English Amateur Billiards Association Coach. He concentrates much of his time in the Plymouth area, working alongside Senior Coach, Roger Cole at the WEBSF Coaching sessions held most Saturday’s at the Victoria Snooker Centre, St. Budeaux

Paul Broad (WEBSF Youth Development Officer for Cornwall) works tirelessly to facilitate and promote Snooker in Cornwall, especially with the youth, he too has much to offer, his enthusiasm is a joy to behold. Vic Wills is relatively new to coaching but shows a sound depth of knowledge and experience. Steve, Paul and Vic join existing English Amateur Snooker & Billiards Coach, David Grigg. The Cornwall Billiards & Snooker fraternity are fortunate to have the services of coaches with such commitment, enthusiasm, knowledge and experience.